skip to main | skip to sidebar

Bought this the other day so thought I might write a little review by giving a scene by scene sumary and my thoughts on each.

1 - Intro
General spiel about what it means to be on "the sharp end". Cue heavy guitar chords and lots of falling off.

2 - Boulder CO
Some cool looking climbs here but by this stage it's all getting a bit yee-haa, mad for it. Apparently "your soul has to be redlining"...wtf!

That said the footage of Matt Segal on "Musta been high" 5.13b R/X is pretty impressive.

3 - Lisa Rands highball
Some nice looking footage of Bishop which certainly makes you want to go there (if you have 4 or 5 pads). The focus here is Lisa Rands doing the very highball This Side of Paradise V10.

4 - Alpine climbing
Normally I would probably enjoy this but it seemed a bit flat. Alpine climbing is always going to be hard to film because of logistics but this was really an account of a suffer-fest with a narrow escape from an avalanche thrown in. 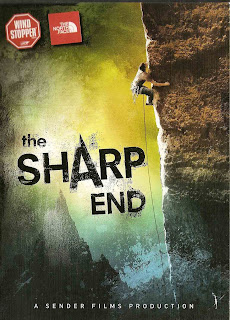 5 - Elb Sandstein tower climbing
Introduced by Cedar Wright, gives an interesting historical perspective, with interviews with local hardman Bernd Arnold. No chalk, nuts or cams....not sure the climbing really appeals to me.
Highlight here is Alex Honnold's ascent of a very tall, poorly protected arete. Very timely given the success of Team America on the grit lately.

6 - Aid climbing Yosemite
Not my cup of tea. Sure, aid climbing can be hard and dangerous, but it's not exactly athletic. It has a scary fall, but the protagonists overreaction is a bit wierd. Next!

7 - Base Jumping
I guess this is like the sharp end on steroids. Base Jumping is always good to watch so it pretty hard not to like, especially the archive footage of Chris McNamara landing near some unsuspecting hikers.

8 - Steph Davis free soloing
Builds up with Steph on Concepcion 5.13 then onto a solo of Longs Peak....and more base jumping thrown in for goo measure.

9 - Eiger free base
The best episode for me. Totally out there by Dean Potter on Deap Blue Sea (5.12, 7b+). An insane mix of two separate genres in an alpine setting with all the related issues of climbing/falling in such an environment.

The extras, like the main film are a bit of a grab bag, although mostly focused on roped climbing, with Adam Ondra climbing at his local crag buried in there as well. Slightly odd as he is the only non-American to star.
Posted by Morgan74 at 11:18 PM No comments:

This is an annual event in Argentiere la Besse, showcasing the local ice climbing. I went to the 2008 one which was my second ice climbing trip. It's a great way to meet new people and get detailed local knowledge of ther best places to climb. Organisation is done by Gérard Pailheiret, a local guide, and highlights include, free shuttle buses to climbing venues, gear stalls by sponsors, free equipment testing, film nights etc.

Further information on the 2009 festival here:

Here's a pic of me on Y-Gauche at Ceillac, a cool little crag towards the Italian border (which has a nice short walk in): 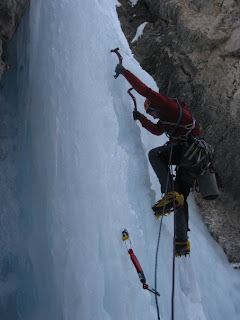 Just a quick first post to highlight an impressive ascent of the Dru. Not something I am likely to ever attempt but the topo my be of use to somebody. Picked the poster up at the Ecrins Ice Festival which was cool. More of that later. 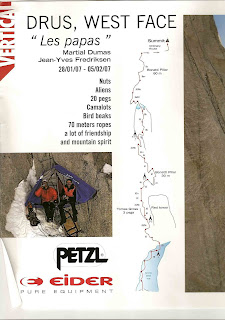 Morgan74
Keen climber, spent most of my life in Australia but now based in London.